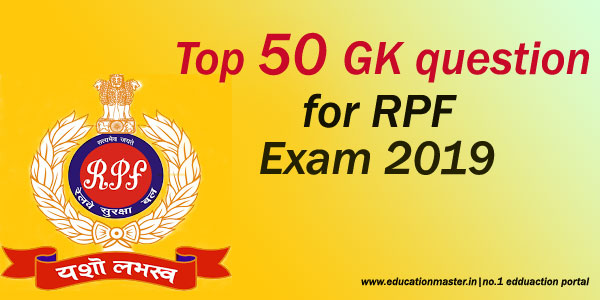 These 50 Gk question is important for those Candidates who are preparing for RPF Exam 2019 held on January and also important for other exam like SSC(CGL,CPO,etc),NDA etc.

1-Recent study shows that which is the best indicator of Diabetes ?

3-What is the chemical name of Lunar caustic ?

4-what is the capital of Poland?

5-which vitamin has role in blood clotting?

6- Headquarter of UNSECO is situated in?

7- what is the currency of Somalia?

8- Under which article Election commission is established?

9-Plant growing on rocks are known As ?

10-where is mariana trench located?

11-reservation of Scheduled castes and scheduled tribes comes under which Indian constitution?

12-Mahayana is related to which Relgion”?

13-where is Lothal city located?

15- Who were the first king to introduce a gold coins in india?

16-What is obtained after polymarisation of PVC?

17-what is the CGS unit of energy?

18-Antyodaya Programme is related with?

19-Who is the vice-chairman of NITI AYOG?

20-Total income of country is??

21-Density of water is high at which temperature ?

23-who was the first governor general of India?

24-Manas National park is situated in which state?

25- 22nd edition of FIFA world cup is scheduled in which country?

28-which state of India is known as the Manchester of India?

31-edible part of onion is?

32-Saltora Range is located in?

Ans-Part of The karakoram range.

33-pepti is the festival of?

34-cytology is study of?

35-kisan Diwas is celleberated on?

36-Prevention of terrorism Act(POTA) is enacted in which year?

38-Lamberts law is associated with?

39-Most sweetest sugar is ?

41-Mahayana associated with which religion?

42-Jaundice is caused due to infection at which part of the body?

43-Deficiency of vitamin B1 cause which Disease?

44-The outermost layer of the Sun is kmown as?

48-Decimal system of Indian currency started in which year?

50-The Sarangeti wildlife sanctuary is located in?

SSC CGL previous paper of reasoning with a ...
Reasoning